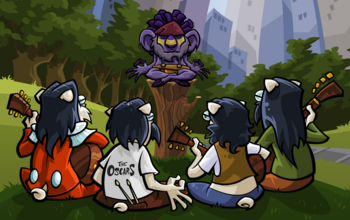 "Yes, screaming girls everywhere ran screaming whenever the Beat Alls made the scene. Individually, it had been a long and winding road. But together, the Beat Alls, or the 'Bad Four,' as they were also known, had finally conquered Townsville. Their rise to fame can be attributed to their ability to deliver hit after hit after hit... to the Powerpuff Girls. With Mojo Jojo on blaster rays, the acidic spit stylings of HIM, Princess accompanying Mojo on blasters, And Fuzzy, the shy one, provides the rock. Thus the Brutish Invasion had begun."
— Reporter, The Powerpuff Girls (1998), "Meet the Beat Alls"
Advertisement:

The Beatles are said by many to be the single most influential music group of all time. They led The British Invasion, legitimized Rock & Roll as an art-form, led the countercultural march of The '60s into the revolutionary renaissance of The '70s and are the most successful example of a band to ever name themselves after a noun preceded by the word "The". While The Beatles spawned too many copycats to mention in the real world, the world of fiction has its own Beatles Expies.

The band would comprise Captain Ersatz caricatures of the original band's line-up — John Lennon, Paul McCartney, George Harrison, and Ringo Starr — and are often accompanied by people bearing a striking resemblance to other figures in the band's history, like Yoko Ono, the Maharishi Mahesh Yogi, or Pete Best. Their music is portrayed in the same upbeat 1960s rock-style, their fashion either mod or hippie, their fans in the millions and their most iconic moments themselves being spoofs of the Beatles' high points, like their 1969 rooftop concert on the Apple Corps building.

By virtue of this trope, examples of Abbey Road Crossing, Bigger Than Jesus, Sgt. Pepper's Shout-Out, and Rooftop Concert abound.