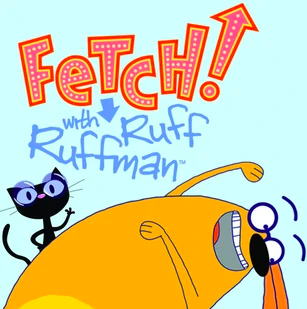 "Pitched my vision for a show
They loved it! Thought I was a pro
They got my contract back to find
To their alarm... a dog had signed!"
Advertisement:

FETCH! with Ruff Ruffman (2006-2010) is a PBS show produced by WGBH Boston that is part game show, part parody of game shows, and part reality TVnote the children who take the roles of contestants actually have to go out and do something, ranging from adventures in space camp to working out a "haunted castle", but they also have interactions with the titular dog and each other inside a sort of hub for the show. It is also a Spiritual Successor to ZOOM, which was also produced by WGBH.

The host is Ruff Ruffman, an animated dog who, as it is explained in the catchy opening tune, got bored with normal dog things and decided to host a game show in his owner's garage. Additional characters include a cat named Princess Blossom Pepper-Doodle Von Yum Yum, introduced in season 2 as Ruff's assistant and eventual producer, and a mouse named Chet, introduced in season 3 as Ruff's assistant, although he never does anything the way Ruff would actually like him to.

Hilarity Ensues, but so does education.

Each episode generally follows a standard format, with the introduction of the six contestants. These change each season, but are generally middle-school aged kids. Ruff sends some of them (and occasionally all of them) out on various challenges. The contestants who stay behind have to answer trivia questions about the challenges during the Half-Time Quiz Show. At the end of the show, each contestant is awarded points, leading up to the final episode in each season and the crowning of another Grand Champion.

A handy animated machine manned by Ruff, called the Fetch 3000, divides the young contestants — excuse us, Fetchers — into three groups: some of themnote the exact number changes from episode to episode, but the "Fetch Fairness Guarantee" ensures that all contestants are given an equal opportunity for points by the end of the show charge to the front of Studio G - otherwise known as "Ruff's garage", though he always insists that it isn't – to collect their missions from the mailbox, with Ruff's cheery yell of "Now g-o-o-o Fetch!" accompanying them. The chosen group all go off to enjoy their challenges, and the show focuses on them until about halfway through the program, at which point Ruff provides the leftovers with a "Half-Time Quiz Show" with some good opportunities to score points based on what the field Fetchers had been doing. While the kids left over can't score as many points as the away kids, Ruff points out in every episode that every contestant gets the same number of home and away missions, so they all have the opportunity to win the same amount of points by the end of the season. The focus turns back to the kids in the field until they return to Studio G, at which point the Fetch 3000 calculates their scores. Often, at the start of the week, Ruff will send the Fetchers out all together on one big mission.

Ruff constantly provides the Fetchers with taunts of a "big prize" to be awarded by the end of the season, but he never tells them what it is and admits on a few occasions that he doesn't know what to give them, either.

In May 2014, WGBH announced an animated spin-off with Ruff and Blossom titled Ruff Ruffman: Humble Media Genius, a series of Internet video spots about safety, which debuted in fall 2014. Find the original announcement here

and the spots here

Another spin-off was released

in 2017 entitled The Ruff Ruffman Show, this time focusing on Ruff, Blossom, and Chet teaching young viewers about science. In the show, Ruff finds himself setting up a pet-sitting service and bilked into the awkward situation of pet-sitting a rhino. A pair of real-kids helps him through the trials of caring for such an unusual pet by making things using materials you can find around your home or neighborhood. This was followed by three other arcs - one with Ruff in a pursuit of a plushie of himself to give to his grandma, one involving a cook-off and one called "Ask Ruff First." (ARF!)

In 2020, PBS introduced another short-form series, Team Hamster!, in which said hamsters have to solve problems created by Ruff when he screws up in his role as a school janitor.