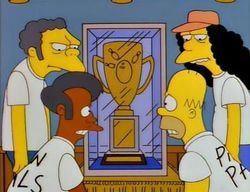 In order to play on League Night at Barney's Bowl-A-Rama, Homer assembles a ragtag group of bowlers (Apu, Moe and Otto the bus driver) to play, but when he can't pony up the $500 fee, he asks Mr. Burns for the money, who is so high on ether that he thinks Homer is The Pillsbury Doughboy (Poppin' Fresh). Meanwhile, Bart buys the latest issue of MAD and finds an iron-on T-shirt decal, which he wears to school — and the ensuing riot leads Springfield Elementary to implement a uniforms-only dress code. However, it robs the children of their individuality.