Series / The Office (US) 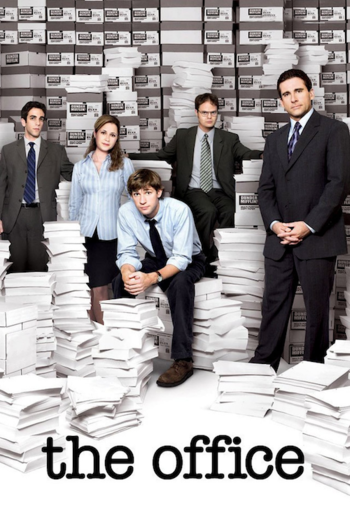 "An office is a place to... live life to the fullest. To the max. To... an office is a place where dreams come true."
"The people that you work with are just, when you get down to it, your very best friends."
— Michael Scott
Advertisement:

Based upon the British version, the American adaption of The Office ran on NBC from 2005 to 2013. Set at the Scranton, Pennsylvania branch of the Dunder Mifflin paper company, the series starred Steve Carell as office manager Michael Scott; also featured in the cast were Rainn Wilson, John Krasinski, Jenna Fischer, B.J. Novak, and Ed Helms, with (for a while) James Spader.

The show started out as a fairly straightforward Cultural Translation and initially received a generally skeptical-to-unfavorable reception, but soon came into its own as it moved away from the original's awkward, cringe-inducing brand of humor and towards more of an absurdist style, and quite notably focused on the rest of the office workers to a far greater degree than the original. In the UK (where it's subtitled An American Workplace to avoid confusion with the original), it has — shaky start notwithstanding — been much better received than most American remakes.

The American Office went on to become one of the most acclaimed comedies of its era, winning accolades in particular for the performances of Carell and the rest of the cast. It also spawned Parks and Recreation, a very similar Work Com set in the public sector rather than the private, and a further Spiritual Successor with Brooklyn Nine-Nine, a Police Procedural comedy. It was also notable as one of the first network TV shows to really embrace the internet and video streaming, beginning with special edited versions of episodes made available after airing, then extending to a number of web-only mini-episodes.

With quite a few classic episodes, and as the subject of endless Memetic Mutation, the show has proven to be enduringly popular. It holds the title of the most streamed show in the history of Netflix (though it moved to the NBCUniversal streaming platform Peacock at the start of 2021).

There are two different Podcasts about the show's history hosted by cast members: Office Ladies (Jenna Fischer and Angela Kinsey) and The Office Deep Dive (Brian Baumgartner; Fischer and Kinsey have both made guest appearances).

Not to be confused with Office Space, a much darker comedic take on American office work, or with the 1995 Valerie Harper CBS sitcom of the same name (which, since it only ran six episodes, was quickly forgotten anyway).

Michael has this reaction when he discovers Toby has returned from Central America.

Michael has this reaction when he discovers Toby has returned from Central America.