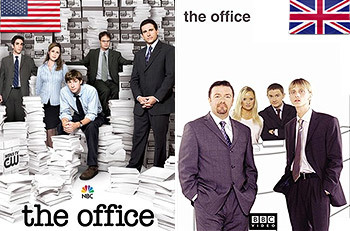 Two shows on opposite sides of the Atlantic can be compared with each other.

Typically, the older show is remade on the other side of The Pond. Most often, a UK show is remade in the US. In the case of foreign reality or game shows, this is because they are not usually aired by US commercial networks, and this allows American audiences to directly participate by becoming eligible contestants. Also tends to occur more with comedies, police procedurals and shows about government agencies, since those things can be very region specific. Therefore if the show wants to expand its audience, it usually has to do it by creating a separate series rather than simply working with a local broadcast network because the new audience would either not get the jokes or not understand the plot. Otherwise, British shows rarely feel the need to do any localization for Americans and the same generally applies to American shows: despite the actual massive cultural, economic and political differences between the two nations. This trope can also apply to Canadian shows, although in this case the trope is very rarely applied even when it probably should be, due to the similarities between (anglophone) Canadian and American culture. American series tend to be much more popular in Canada than Canadian series, where the reverse is rarely true, even as the CBC has a sizeable American audience near the border. Note that this is not the trope about shows supposedly set in one country actually being filmed in another: that's California Doubling.

Shows that spread to even more countries become Multi-National Shows.