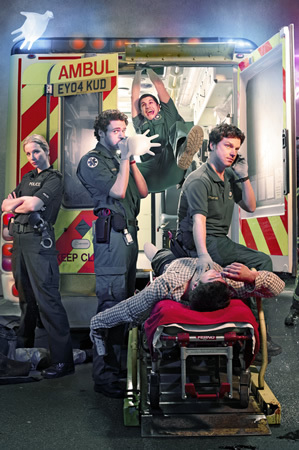 Sirens is a British comedy/drama series focusing on the lives of three ambulance-men and a policewoman, and their roles in a rather truthful (but bleak) depiction of modern-day life.

Stars of the show are: Stuart Bayldon (Rhys Thomas), a Nietzsche Wannabe who has daddy issues; Ashley Greenwick (Richard Madden), a private promiscuous gay man who happens to be Stuart's best friend and co-worker; Rachid Mansaur (Kayvan Novak), the new guy who gets to learn valuable life lessons; and Sgt Maxine Fox (Amy Beth Hayes), who is desperate for a boyfriend. She is a very close friend to Stuart, and they're only "friends".

It's based on the book Blood, Sweat & Tea by Tom Reynolds, a nurse and former emergency medical technician for the London Ambulance Service.