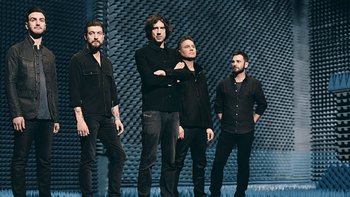 Left to right: Paul Wilson, Nathan Connolly, Gary Lightbody, Jonny Quinn and Johnny McDaid
"All this feels strange and untrue
And I won't waste a minute without you"
— "Open Your Eyes"
Snow Patrol is an Alternative Rock band from Northern Ireland, formed in 1994. Originally conceived as a trio called Polarbear, the band has since expanded over time into a quintet, with vocalist/guitarist Gary Lightbody being the only remaining original member.
Advertisement:

After releasing two independent albums through Jeepster Records, the band saw moderate success in the United Kingdom with the 2003 album Final Straw, with notable singles such as "Run", "Chocolate" and "Spitting Games". The band saw further worldwide success in the mid-2000s with its follow-up Eyes Open, with "Chasing Cars" being their most notable hit thanks to its exposure through Grey's Anatomy. Since then, the band have released three more albums, with their latest album Wildness being released in 2018.

Even though they started as a rock-oriented band early on, the band is mostly known for emotional alternative pop rock songs akin to bands like Coldplay and Death Cab for Cutie, due to them having commercial success in an era filled with similar bands. Despite that, the band was still able to stand out by being more earnest than some of their contemporaries and gather a huge fanbase that follows them to this day.