Series / Till Death Us Do Part 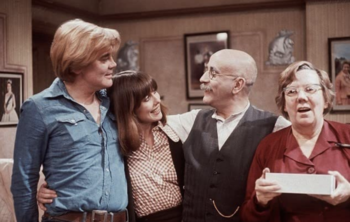 A rare moment of civility in this householdnote Left-to-right:Mike and Rita Rawlings, Alf and Else Garnett
The classic Britcom that inspired All in the Family.
Advertisement:

'Till Death Us Do Part is a British situation comedy created by Johnny Speight. The series centered on Alf Garnett (Warren Mitchell), a highly conservative, working-class man who espouses racist and anti-socialist views, and his family consisting of his long-suffering wife Else (Dandy Nichols), his more open-minded daughter Rita (Una Stubbs) and her lazy socialist husband Mike Rawlins (Anthony Booth). Alf and Mike regularly clashed over their opposing world-views, representing the generation gap between younger, more left-wing British citizens and older, right-wing citizens as well as addressing the increasingly prevalent political issues in British society.

The series aired on BBC1 from 22 July, 1965 to 16 December, 1975. Alf Garnett became an iconic figure in British culture and Mitchell would continue playing the character on stage and television until Spieght's death in 1998.

Tropes pertaining to 'Till Death Us Do Part