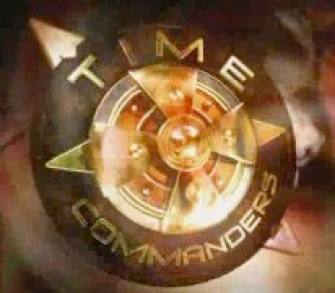 "The stakes are high; battle is imminent."

Time Commanders is a BBC historical Game Show presented by Eddie Mair (and later Richard Hammond) between 2003 and 2005, known mostly for using the Rome: Total War engine to depict its battles.

The show offered contestants a chance to reenact historical battles in an attempt to do better than the original combatants. The teams of four were divided into two groups: the Generals, who had an overview of the battlefield and directed overall strategy, and the Lieutenants (later called Captains), who were in charge of the army itself.

Playing a video game by committee is about as hard as you'd expect. Throughout the show's two seasons, only half of the episodes ended with the players victorious, and in many cases the teams were outright slaughtered. Indeed, part of the show's appeal is watching just how spectacularly the teams can fail.

During the episodes, a pair of military historians (Aryeh Nusbacher and, on a rotating basis, Mike Loades, Saul David, Mark Urban or Adrian Goldsworthy) watch over the battle commenting on the team's tactics, as well as discussing facts about the real battle, including the military culture and weapons of the sides involved. At the end of every episode, they then discuss what the team did right, what they did wrong, and show how the real battle went.

In July 2016, Creative Assembly shared a call by the BBC for participants in a revived series, through the Total War Facebook page. The third series began airing on 12 December 2016, now presented by Gregg Wallace, with Lynette (formerly Aryeh) Nusbacher and Mike Loades reprising their roles as historical experts. Unlike the first two series, the third did not focus solely on classical antiquity, with one episode being given over to the Battle of Waterloo. More significantly, rather than a single team of four taking on the enemy, now two teams of three players take on each other to see who is the superior commander.