Series / This Time With Alan Partridge 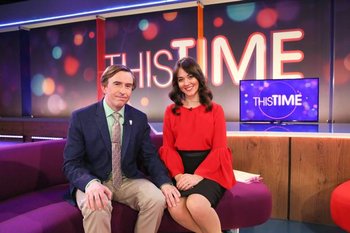 2019 British comedy seeing the return of Steve Coogan as Alan Partridge... in more ways than one. A second series was released in 2021.

Over twenty years after his first (and last) television hosting gig ended ignominiously with the shooting of a guest and the punching of a senior programming executive with a chicken, Alan Partridge has (somehow) returned to BBC television. After the regular male host of This Time, a weekly late-night magazine program (think The One Show) has suddenly fallen ill, Alan is drafted to temporarily act as the host alongside Jennie Gresham, the chipper young female host. Eagerly grasping what may be his last chance to return to broadcast television and escape the dreary world of local digital radio, Alan launches into his new role with all the talent, ability, charm and skill he is able to muster.