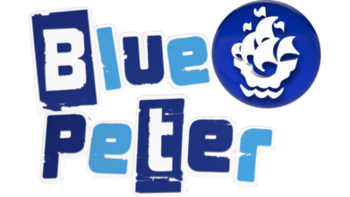 Hey everyone, today we're going to learn how to write an article on TV Tropes using nothing but a keyboard, some sticky-back plastic and an empty washing-up bottle. But first, here's One I Prepared Earlier:
Advertisement:

Blue Peter is the longest running children's programme in the world, starting in 1958 and still going today. Usually aired on BBC1 for most of its run, but moved to BBC2 during Wimbledon. Nowadays airs on CBBC.

The show is best described as a "magazine show". The presenters (anywhere between two and four at any one time; in the era where there were four presenters, the show would have three of them in the studio per episode on a rotating basis) do a variety of different activities:

(They once managed to do an entire edition on the Young Bond novels, complete with performances of James Bond songs, without showing a single movie clip).

There are often performances by various people. Everyone who appears on the show gets a Blue Peter Badge, which allows free admission to a number of UK attractions. There are other types of badges, the most famous being the Gold Badge, given to people who have done something very special (presenters are now getting them on departure).

Every year, the team go on a Summer Expedition abroad. There is also the annual charity appeal, with the "totaliser" and the attendant "bring-and-buy sales" - usually, the charity appeals run on a biannual schedule of these and 'collecting X' note in 2009 it was T-shirts, used to make hospital gowns for kids with cleft lips and palates from India, often things which can be reused, or recycled for monetary gain.

The show has a number of resident pets. The most famous of these was a dog called Petra (actually a substitute after the first dog died), whose death became national news.

ITV tried to launch a knock-off imitator called Magpie, but this faltered and failed after perhaps four years, despite the attractions of presenter Susan Stranks.

The show has an extremely good relationship with Doctor Who:

There have been 38 presenters over the years; the show is currently presented by Lindsey Russell (who won a televised reality show-style competition to find the new presenter, Blue Peter: You Decide, and is the only presenter to date to be appointed in such a way), Richie Driss and Mwaksy Mudenda. Notable former presenters include:

There have been a number of very notable moments:

In 2012, the BBC announced the end for Blue Peter on mainstream BBC TV. The show left its long-time home on the BBC1 network (along with the last of the childrens' shows in their traditional slot) and was moved to the CBBC children's network, one of the BBC's many digital channels. This decision has caused comment and criticism, especially as the BBC, like ITV, proposes to fill the gap left by the departure of children's TV with quizzes and game shows with much lower production values. This follows on from the decision that after forty years, there will no longer be an annual tie-in book.