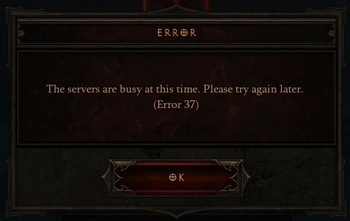 On that day, millions of Diablo fans developed a fear of the number 37.
"Our servers are experiencing issues. Please come back later."
— Pokémon GO
Advertisement:

When the latest update to an online something-or-other is released, sometimes so many people crowd in to view it that the website crashes. That, ladies and gentlemen, is an example of a Demand Overload: an update or issue so awesome it's directly responsible for crashing the host website.

This trope also applies to other forms of media; for example, a product selling out so quickly it can't be kept on the shelves. The technical term for when demand hugely overwhelms supply is backordered.

A Demand Overload can happen due to a number of reasons. It may be due to popularity caused by positive word-of-mouth or a good marketing campaign. But, especially in the age of social media, another common way to cause one is when a famous personality gives a Colbert Bump to a site that cannot handle the sudden and large increase in traffic the new publicity brings with it. A popular website like Reddit posting a link to a smaller, relatively unknown site can also cause a similar effect, known as the Slashdot effect.

With physical items, the problem can come from scalpers who buy up the product to resell at a markup, in addition to the regular demand from customers who actually want the product.

Contrast Acclaimed Flop. Depending on how you look at it, can be a subtrope of Gone Horribly Right.

open/close all folders
Crashed due to popularity

Anime and Manga... on the internet

Animated Films... on the Internet

Live-Action Films... on the internet

Live-Action TV... on the internet

Music... on the internet