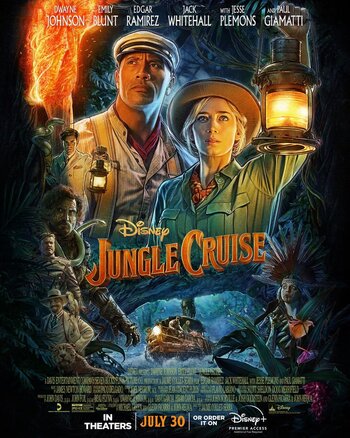 "Of all the jungle cruises you can take in the Amazon, this one is undoubtedly the cheapest, but also the most thrilling."
"Legend has it there is a tree in the Amazon that possesses unparalleled healing powers. And the Arrowhead is the key to unlocking it."
— Lily Houghton
Advertisement:

Jungle Cruise is a 2021 adventure film directed by Jaume Collet-Serra, produced by Walt Disney Pictures and based on the Disney Theme Parks ride of the same name, and in turn loosely based on The African Queen, the film that inspired the ride.

Set during the early 20th century, a riverboat captain named Frank Wolff (Dwayne Johnson) takes Lily Houghton (Emily Blunt), an English scientist, and her brother MacGregor (Jack Whitehall) on a mission into a jungle to find the Tree of Life, which is believed to possess healing powers. All the while, the trio must fight against dangerous wild animals, a competing German expedition and a rather unexpected enemy.

The film also stars Édgar Ramírez, Jesse Plemons and Paul Giamatti. It was released on July 30, 2021, simultaneously in theaters and on Disney+ with Premier Access. The film became available to all Disney+ subscribers on November 12, 2021. In August 2021, it was announced a sequel, again featuring Johnson and Blunt, had been greenlit.