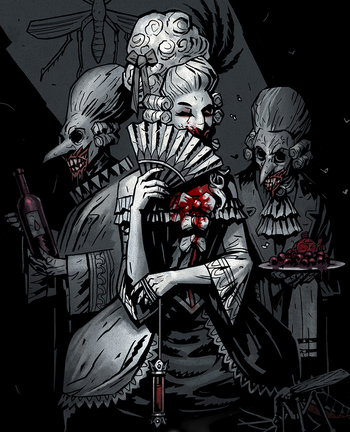 They would love to have you for the feast.
"All baronets are bad; but was he worse than other baronets?"
— Ruth, Ruddigore
Advertisement:

A lot of tropes have origins way back when media was still forming; this is one of them.

It might have been an early way to appeal to the masses, or just due to the way aristocrats tended to look down on the general public. But it was then and is now really popular to cast aristocrats as villains.note Ironically, the word "villain" comes from the Medieval Latin word for villager or peasant, and was used derisively by the aristocrats of feudal Europe. A variety of Meaningful Titles exist — people with feudal titles are very commonly evil. Popular titles are Countnote in Britain, they're guaranteed to be foreign since the equivalent local rank is Earl — probably because in the Medieval Accent it sounded kind of unfortunate, and Baron — two titles which are rarely seen on a good guy. (Oddly enough, a Countess has a better-than-even chance of being a decent woman.note And Britain does have Countesses, it's the female equivalent of an Earl.) And though it doesn't show up a great deal, you should break out in a cold sweat when you meet a Viscount. Unless it's Viscount Horatio Nelson. Interestingly, both counts and barons are fairly common titles among Continental Europeans, but rare among the English (where the rough equivalent of a count would be the earl who is usually depicted as stodgy but typically benevolent patriarch), which may suggest a regional bias in which aristocrats are cast as villains.

Needless to say, Barons fare the worst in popular fiction, with one notable exception when used as a badass nickname. Maybe it's something to do with the old nickname "Sugar Baron", who makes his wealth off the labour of the poorest of the poor, and from slaves. (In the U.S. this became the "Robber Baron", the derogatory term for wealthy industrialists that made their money off the backs of immigrant labor.)

One major exception: Dukes are usually relatively nice. This may be because the title was awarded to those who rose to aristocracy as war leaders. Thus, the Duke has a "grass roots" feel to it, and a badass quality; as well, much like The Good Captain, military titles are generally for good guys, with the possible exceptions of Admiral and Major. Also, before the 18th and 19th centuries, Dukes were generally too high up the ladder of aristocracy to really have much contact with common people at all. Because of this, Dukes were not the nobles that were directly oppressing the common people, and so didn't receive quite the same stigma… especially since in some local cases, a Duke actually ran interference against a lower-ranking nobleman on behalf of the masses. Dukes (and especially Grand Dukes) can be evil if the Hero is a Royal. Often a Duke is scheming to take over the throne himself.

Other titles generally have a more neutral feel to them — Earls tend to be good but quite elderly and senile, while it is rare to see a Marquess in anything other than a particularly faithful historical adaptation. Baronets were quite often villains in both Victorian Melodrama and Wodehousian comedy (not to mention the Gilbert and Sullivan operetta Ruddigore), probably due to the fact that baronetcies could be more or less openly bought, indicating that the character is not only Nouveau Riche but also ambitious and seeking to rise beyond his station (the worst social sin in Victorian Britain). Queens/Kings have an equal chance of being good, evil, or anywhere in-between. And, of course, Princesses are more likely than not to be good — but not always.

The title Sir is the best of the lot, being martial, unprepossessing, and upwardly mobile. Even actors like to be called Sir.

The title Lord is somewhat problematic as strictly speaking any British or Irish Peer (other than a Duke or Duchess) would be addressed as such. For instance, a character named 'Lord Bloggs' might be the Earl of Bloggs, or the Marquess of Bloggs, or so on. The title "Lord —" is also a favorite of a certain type of supernatural villain (Lords Vader and Voldemort, most famously), but are really a separate trope — normally not real aristocrats, and normally not powerful simply because of their titles.

The Prince will almost always be charming, even in the rare cases where that is not actually his name. However, there are two uses of the term. The Prince may be the son of a King, or it may be used to refer to any ruler or leader (re: Machiavelli). If an evil prince ever appears in fiction, be sure to check that it is not in fact the latter. And of course, the Evil Prince may be out to kill the good one.

A Governor tends to be ambitious and sleazy, if not outright evil, especially in works set during a time of chaos and war.

If it's an Action-Adventure story, you can bet anyone with the title Lady will be a Lady of War.

If there's a Queen then she will be regal and respected or God Save Us from the Queen! Conversely, a Prince is much more likely to be The Wise Prince; compare Fisher King.

Don't even get us started on Emperors or Chancellors.

While East Asian and pre-Columbian noble titles are usually translated — Huangdi and Tlatoani are all simply Emperors, and treated as such — the Middle East has an aristocratic hierarchy of its own. Sheikhs and Sultans used to be romantic but since the 1970s oil embargo, they're almost universally bad news in fiction: typically depicted as corrupt, greedy, lecherous, fat, and smug. Emirs have roughly the same connotations, but the title is even more besmirched because of its use by terrorist leaders. Caliphs, however, are a rarity. This is mostly because the title, while extremely prestigious, was powerless on its own most of the time and is completely gone today, the only claimant being a raving terrorist. That being said, in the short period where the caliphs were relevant — the early Middle Ages — they can be seen in "Arabian Nights" Days stories. While these caliphs are usually benevolent, beware of Grand Viziers.

Squires tend to be Quintessential British Gentlemen. They are likely to be rather gruff but good-natured under all that. They tend to either be a retired military officer, or a father obsessed with marrying off his daughters, or with a wife with the same obsession. They are also often seen as the assistant to a Knight in Shining Armor, often a young Knight-in-Training.

Chiefs tend to be a leader of a tribal community, generally a barbarous one. They will likely be badass because their culture insists that Authority must equal asskicking and may even have gotten their job from Klingon Promotion. Alternatively, they are chief of a tribe that has acculturated itself to mundane lifestyles. In that case, expect him to wax poetic about the Good Old Ways.

Several of these kinds of aristocrats together form a Decadent Court.

See also The Baroness and The Caligula. A young aristocrat may fall under Royal Brat.

Aristocrats are often willing to be polite and even with people of their own rank. Moral Myopia, however, often limits it to fellow aristocrats. Commoners are just out of luck — especially servants. If they're not actively in charge, expect them to be part of the Omniscient Council of Vagueness. A Regent for Life will pick any one of these titles, especially if they run the People's Republic of Tyranny. In that case, only when the Rightful King Returns will harmonious social order be restored to the realm.

In most cases, aristocrats are associated exclusively with monarchical and imperial societies. In actual fact, the word aristocrat comes from Athenian democracy. The word comes from the combination of "Arete" (Greek for "the best" or most virtuous) and "Kratos" (power). In other words "power of the best". It originally referred to the fact that leading members of Athenian families were supposed to be first in battle and represent the highest and best values of society. The "best men" (aristocrats) had the highest voting privileges and greatest power. So an aristocrat is not necessarily exclusive to monarchical and feudal nations. The Romans incidentally, after conquering Greece, used the word "optimate" or "boni" which meant the same thing in Latin (Best Men/Good Men), and as in the case of Athens, it was often the case that those who possessed the most wealth, prestige, and power were regarded as the best and good men. In England-France-USA, the word Aristocracy in the 18th and 19th Century was often used in the original classical sense, to describe individuals and interests that restricted suffrage and voting rights.

For the modern version of this trope, see Corrupt Corporate Executive, and to a lesser extent, Nouveau Riche.

Morally Ambiguous Doctorate is also related, insofar as the title of Doctor gives the Mad Scientist some implied legitimacy.

If there are any German or Dutch Evil Aristocrat in the fiction, The Von Trope Family might please us with the delight of their company.

For more information on the British title system, see Knight Fever. Not to be confused with The Aristocrats, a "stock joke" based on this premise.

This trope often goes hand in hand with Slobs Versus Snobs. See also, Eat the Rich and Kill the Poor. This may cause a character to outright dislike the upper-class.

Other and Multiple Types
Anime and Manga

"That's an interesting act. What do you call yourselves?"
Feedback

All of the nobles seem to regard the regular human villagers as toys that can be used, broken and discarded at their leisure. The fact that they're literal monsters certainly helps.

All of the nobles seem to regard the regular human villagers as toys that can be used, broken and discarded at their leisure. The fact that they're literal monsters certainly helps.