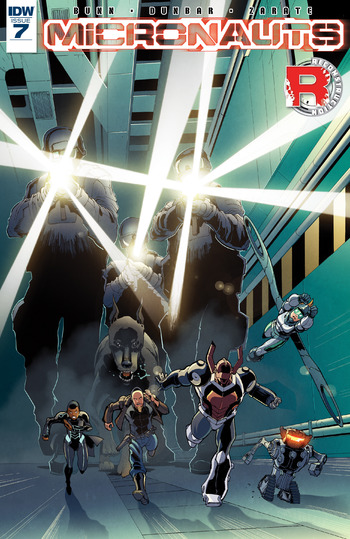 Heroes come in all sizes. note From right to left: Larissa, Oz, Acroyear, Microtron, and Phen. Not pictured: Biotron.
In Another Dimension known as Microspace, all that exists is threatened by the all-consuming cloud of the Entropy Storm. As it expands across Microspace, consuming planets in its wake, the twin armies of the Ministry of Defense and the Ministry of Science are more concerned with fighting each other to secure power than protecting the people of the universe; and as the enigmatic Time Travellers realise, it might take unlikely heroes to save their world.
Advertisement:

, and now owned by Hasbro, the other two being a series by Marvel and a series by Image. Published by IDW Publishing, this new series features ground-up reinvention of the concept and characters; a necessity caused by Marvel's ownership of the original characters and concepts created for their series. A Space Opera in the vein of Guardians of the Galaxy, IDW's Micronauts focuses on a Ragtag Bunch of Misfits who, through a quirk of fate, are the only ones with a hope of saving their home universe. Our heroes are:

Written by Cullen Bunn (Uncanny X-Men, Magneto, Sinestro), the Micronauts comics form a core part of the Revolution crossover, which brings the characters into the Hasbro Comic Universe. Now they just have to try and get home again...

The series concluded with issue 11 and was followed by the miniseries Wrath of Karza. The series will be getting a soft reboot post First Strike as ROM and the Micronauts.