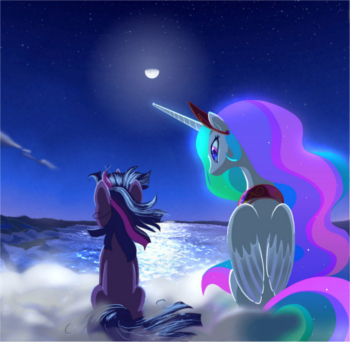 One day, Twilight, all of this will be yours.
Rites of Ascension

is an ongoing My Little Pony: Friendship Is Magic fanfiction by CVBrony.
Advertisement:

Rites of Ascension follows the adventures of Twilight Sparkle fifteen years after the events of the second season of Friendship is Magic, for the most part ignoring anything happening after "A Canterlot Wedding". The story chronicles her ascension to alicornhood and the political turmoil that surrounds her, from coup attempts to scheming aristocrats, to the fallout of millenia-old mistakes.

There are currently several side-stories in the Rites of Ascension Expanded Universe.