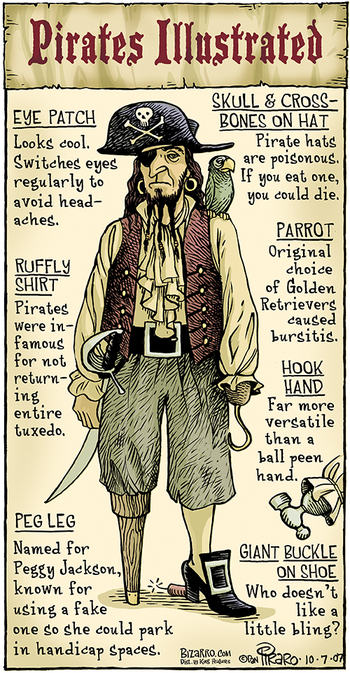 . Used with permission.
"With all those peg legs, hook hands and eye patches, it's like these movies are trying to tell us that pirates, more so than any other group of people in history, were remarkably good at misplacing body parts."
— Cracked, "6 Absurd Pirate Myths Everyone Believes (Thanks to Movies)"

In fiction, most Pirates are easily identifiable by their Stock Costume Traits.

Expect to see some combination of the following:

In most cases, no one individual will have every trait — they'll be spread around the whole crew, for variety. Expect the captain to get a fancier suit (perhaps a Badass Longcoat of the justacorps style) and the most impressive hat; crew members are more likely to wear a bandana, breeches, and a simple shirt (often striped). The most overt examples will be emblazoned with a skull and crossbones. Bonus points if they also Talk Like a Pirate.

This image of pirates can pretty much be traced directly to Robert Louis Stevenson, who single-handedly codified the parrot and peg-leg image with Long John Silver (despite him not having a peg leg). (The hook was popularized later by Peter Pan's Captain Hook.)

That's not to say it has no basis in reality, with some notorious Real Life pirates wearing parts of the ensemble. Edward "Blackbeard" Teach, for instance, got his trope-naming moniker from his Beard of Barbarism, and due to the primitiveness of medicine at the time it was common to see sailors with missing appendages (amputation being a comparatively safer solution to severe limb injuries than trying to let it heal in one piece). The eyepatch was also common, partly because actual eye injuries were not unheard of.note Even for those with no eye injuries, an eyepatch was handy for having one eye always adjusted to see in pitch-darkness, as there was often little in the way of lighting below deck. People who lived from plunder and had no fixed home were also expected to carry their ill-gotten wealth on themselves as gold coins and jewellery, or gold coins beaten into jewellery.

Subtrope of Pirate, of course. Often seen in Gangplank Galleon.

Luz, Eda, and the sailors on the ship are dressed like pirates. King also acts like a parrot saying, "King wanna cracker!"

Luz, Eda, and the sailors on the ship are dressed like pirates. King also acts like a parrot saying, "King wanna cracker!"