She Is the King 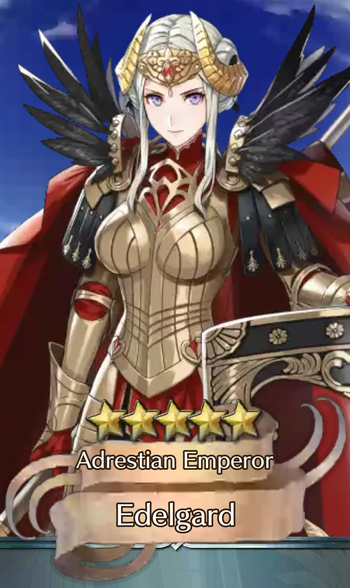 She isn't a mere empress.
Hero: Why is the Demon King a woman?
Demon King: It's a traditional title. I can't help it...
— Maoyu: Episode 1
Advertisement:

When a woman reigns, or otherwise holds some position of power or importance, she may do so with a masculine title and all of the authority that goes with it, instead of using the title's feminine equivalent. The most common version of this takes the trope name literally (a female monarch titled as "King" instead of "Queen"), but there are many other gender-specific titles that can be used instead, one of the more common ones being "Queen-Regnant".

This trope is frequently employed as a means of Gender Misdirection.

Gender Inversions (i.e. He Is The Queen) are far less common, but they do happen. It could be because the society is a matriarchy, the title refers to the king's spouse, or for some other reason. Note that a female character using a gender-neutral title is not this trope because that's what gender-neutral titles are for. Somewhat surprisingly, this trope only very rarely involves a transgender monarch.

In terms of the ranks of Authority Tropes, the tropes that are equal are God Save Us from the Queen!, The Woman Wearing the Queenly Mask, The High Queen, The Good King, and President Evil. The next steps down are The Evil Prince, Prince Charming, Prince Charmless, Sheltered Aristocrat, Warrior Prince, The Wise Prince, and all Princess Tropes. The next step up is The Emperor.

Examples of women in disguise

Examples of women with a masculine title

The fact that it's on this page is a giveaway, but without metatextual clues, few people would guess that the surgeon might be the boy's mother.

Blended and Other Examples