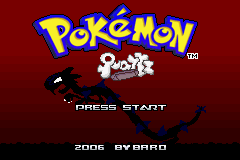 An extensive hack of Pokemon Ruby, created by Baro.

Quartz takes place in the region of Corna (a heavily-edited version of Hoenn), and requires the player to navigate a very different series of paths during gameplay than in Ruby. All names and graphics of traditional Pokémon are replaced with new characters and creatures, although some of these changes are only cosmetic and don't change learnsets or types.

The game contains profanity and adult themes, which are absent from all official Pokémon games. It also has a great number of spelling and grammatical errors, which mostly result from the hack being translated from Spanish, although the grammar improves throughout the game.

While the best-known bootleg cartridge as played on the actual GBA contains serious glitches and errors, the current patch file release works well with VisualBoyAdvance when applied to a clean image of an authentic Ruby cartridge.

A sequel was in development called Pokémon Marble, but it hasn't been updated since 2008. In 2010, Baro released the most recent build of the hack before he quit

in the thread for a Let's Play of Quartz.