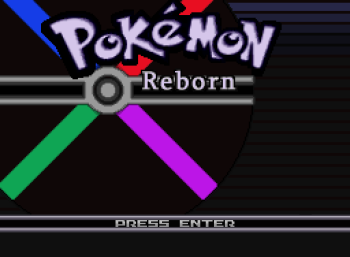 Pokémon Reborn is an episodically released Pokémon fan game set in the newly created Reborn region. Interestingly, Pokémon Reborn is not a ROM hack, but an RPG Maker game. Not only that, its plot and characters are based on the former players of the now defunct Pokémon Reborn League online role-playing group.
Advertisement:

The story takes place in a world struggling with the aftermath of an environmental disaster. In Reborn City, Pokémon are scarce, the lake has more poison than water, plant life consumes whole wards quickly and without warning, and the population rarely ventures outside of the city. What's more, the local villainous team already has the region in their clutches. Enter our protagonist, a new Trainer hoping to take on the Reborn League who finds themself caught up in much, much more.

The game is notable for having a mature story compared to the main Pokémon series, with a terrorist attack happening right in the intro. It's also mind-bendingly difficult, at least in relation to the canon games. For example, a level cap is enforced by the badge system in a much more strict manner, in that you aren't allowed to Level Grind past every leader or the overlevelled team members begin to disobey you. Moreover, there are some absurdly powerful bosses almost coming out of nowhere. They're far stronger than you'd ever expect at that point in the game, with teams and strategies straight out of the Competitive Multiplayer environment.

The game can be downloaded on its official website

. There's also a fairly active forum, which has developed its own internal memes. (Just ask about Terra's couches.)

On June 16, 2015, a Pokémon Reborn forum user named Solarance created a mod for the game called Pokémon Reborn Hardcore (although he later passed control of the project to Commander, another Pokémon Reborn forum user). The mod seeks to make the already Nintendo Hard base game even harder; for example, it gives Gym Leaders from the fourth Gym on (as well as certain other bosses) Mega Evolutions. The download link for the most recent version can be found here

See also Pokémon Rejuvenation, which is another RPG Maker Pokémon fan game that was inspired by this one.