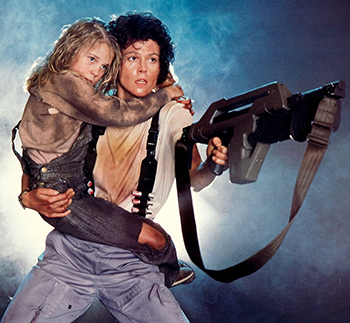 "Get away from her, you BITCH!"
"In society, women are referred to as 'the fairer sex'. But in the wild, the female species can be far more ferocious than their male counterparts. Defending the nest is both our oldest and strongest instinct. And sometimes, it can also be the most gratifying."
— Emily, Revenge
Advertisement:

Like many other mammals depicted throughout history as predators, bears are actually passive animals, and won't attack humans unless provoked. Despite this, if you even think about getting between a mother bear and her cub she'll tear straight through you. Threaten her children, and you are in for a world of hurt. Righteous awesomeness will ensue, and the heroine reclaims her child with a tearful embrace.

Heaven help you if an Action Mom or even a Team Mom invokes this trope. If you think a normal Mama Bear is scary, hell hath no fury like a Motherly Scientist with access to One-Man Army levels of weaponry/technology/money/superpowers to protect her children. It can lead to a Did You Just Punch Out Cthulhu? moment.

Losing her child may cause a Start of Darkness into villainy or Anti-Hero-dom... anything if it will get her revenge, and not just on her own enemy but on anyone who would inflict this same pain on others. If the character is already a villain, expect it to overlap with Villainous Parental Instinct.

The Spear Counterpart is referred to as Papa Wolf rather than "Papa Bear". Disneyfication aside, male bears are notoriously poor parents in the animal kingdom (infanticide among bears is the main reason why mama bears are so protective in the first place), whereas male (and female) wolves will react to their offspring being threatened in a very similar manner to mother bears.

Sometimes overlaps with Apron Matron and Pregnant Badass. It can be a cause of Let's Get Dangerous!, showing that the sweet and caring mother figure is dangerous. They may be a Knight Templar Parent. Provides a simultaneously simple and believable way to switch someone between dangerous and more "cute" modes without compromising the character as either. After all, if It's Personal then the claws come out.

If an older sibling is the one who takes up the role, s/he is a case of Big Brother Instinct/Big Sister Instinct. For a teacher who behaves like a Mama Bear if their students are threatened, see Badass Teacher. When it's the child who shows extreme feats of bravery or strength, and/or is very protective of their mother, it's Extremely Protective Child.

Related to Beware the Nice Ones and Berserk Button. See also the non-human counterpart, Monster Is a Mommy. Not to be confused with Bears Are Bad News (unless you're dealing with a literal Mama Bear). The Violently Protective Girlfriend is a much younger form of this trope that applies when the mate is in danger. Evil characters can use this too; after all, Even Evil Has Loved Ones. A particular Subtrope is the Badass and Child Duo which can take the form of a female badass protecting an orphaned, unrelated young child, though male badasses are also common. Also compare Cub Cues Protective Parent for examples from the animal kingdom.

Remember when adding examples that this is Always Female. The male equivalent is Papa Wolf, so all Spear Counterparts should be placed there. When Mama Bear and Papa Wolf team up, it's a Battle Couple and all pairs should be placed there. Parents in Distress is the inversion, when Mama needs to be bailed out by the kids. If she has a Mama Bear of her own, it's a good idea to Never Mess with Granny.

Also, remember that this this trope is mama bear, so it is not about being protective of one's friends, unless of course it is something like an Intergenerational Friendship or Team Mom. In that case, it is okay. Otherwise, don't do it. Tropes about helping friends should go to A Friend in Need, The Power of Friendship etc.

This trope is Truth in Television, and universal.

Bubbie vs the Sea Urchins

When a group of street urchins threaten to beat up Flapjack, Bubbie steps in to defend him.

Bubbie vs the Sea Urchins

When a group of street urchins threaten to beat up Flapjack, Bubbie steps in to defend him.