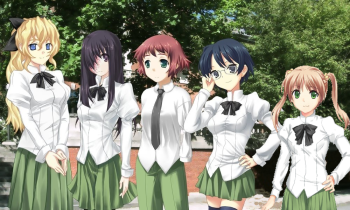 From left to right: Lilly, Hanako, Rin, Shizune, and Emi
"You are not alone, and you are not strange. You are you, and everyone has damage. Be the better person."
— From this official art

Katawa Shoujo (かたわ少女, translated as "Cripple Girls") is an English-language Bishoujo Game Visual Novel developed by 4 Leaf Studios using the Ren'Py engine. It's also an eroge, though the explicit content is a small part of the overall game and can be disabled if the player so chooses.

Hisao Nakai, an ordinary teenager living an ordinary life, has it turned upside down when a congenital heart defect forces him to attend a new school after a long stay in the hospital. Despite his initial feelings of alienation and difficulty fitting in, Hisao comes to befriend his new classmates while pursuing a romantic relationship with one of the five girls he has class with. Sounds like your average Dating Sim full of cliches, right? Well, you may indeed see a lot of cliches in this game, but you will not be seeing them the way you usually do.

If you are curious about the title, "Katawa" [片輪] is actually a Japanese word meaning "imperfect" or literally, "one wheel" (not a polite word to use, it has about the same connotations as "crippled." See Intentionally Awkward Title below). The concept is based entirely on a single-page

◊ omake by doujinshi artist RAITA (aka the character designer for Valkyria Chronicles). The page showed several young women with disabilities: blindness (Lilly), major burn scars and accompanying mental/emotional trauma (Hanako), deafness (Shizune), legs amputated below the knee (Emi) and missing arms (Rin). 4channote later some non-4chan users joined the team instantly took to the concept and began developing the game in earnest, taking care to present the disabilities in a realistic and respectful way. The game takes place at the fictional Yamaku High School for disabled teenagers, and all the main characters have some sort of disability, including Long QT Syndrome

A demo of the game, titled "Act 1", was released in May 2009, and covers the entire first Act of the final game, before it branches to paths specific to each girl. It proved popular and was eventually translated into eight languages (English, French, German, Hungarian, Italian, Japanese, Russian, and both simplified and traditional Chinese). The full version (also free of charge)

was finally released January 4th, 2012, on the fifth anniversary of the original 4chan thread that started the game's development.

The characters also make an appearance in the fanmade Flash game Katawa Crash, an irreverent, Shout-Out-filled remake of NANACA†CRASH!! made while the VN was in the late stages of development. There is also Katawa Shoujo Lite, a Castlevania parody starring Kenji made by this fan

, with the rest of the cast (minus Hisao) serving as the enemies. And "Donkey Kenj,"

a free Unity-based game for Windows/Mac/Linux based on Katawa Shoujo and Donkey Kong.

Also worth noting are Missing Stars and the now-shelved Love Despite,

Visual Novels set in a school for students with physical/mental disorders being developed by fans of KS as Spiritual Successors.

Some of the developers have gone on to work on other projects. Lilly's writer, Suriko, is now working on the visual novel First Snow

with developers Salty Salty Studios. Weee, the artist for Hanako's character art, did some of the art for the yuri kinetic novel Highway Blossoms. She did some of the CGs including the sexual CGs.

A fandub for the game, called Katawa Seiyū

) was being worked on. It was originally set to be released on February 14th, with the cast being unveiled every two days, but this was been pushed back until all the minor characters of Act 1 were unveiled, meaning that the release date was constantly pushed back. One notable person involved in it was JesuOtaku, a member of That Guy with the Glasses; He was voicing Rin, but later said on Twitter in April 2014 that the project was dead. But now nine new video clips have been released.

Another ongoing fandub from the Let's Dub Project can also be found here.