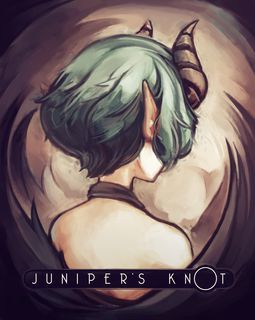 is a short Kinetic Novel developed by dischan in Ren'Py, set around "20s/30s- "Jazz Age", but the fiend's stuck in a 15th and 16th C mindset and you never see any of the "modern" setting aside from the boy (and the UI, I suppose)"

The title, as explained by the creator

"Juniper" is representative of "chastity", as well as the name of a saint known famously for their patience. That it is a "knot" of "Juniper" is to say that it is a binding/predicament of patience/chastity- forced. It ties in to the fiend's situation, who is by no means chaste or patient but has been for ages due to her "curse". Hence the stylization of the "O" of "knot" in title cards, and/or the presence of the large "O" on the main menu and elsewhere. It represents the circle she is trapped inside of. Long story short, "Juniper's Knot" is a way to tell the premise of the game without being direct. "Juniper" has other neat symbolic meanings; and so other interpretations can still be found.

A certain autumn morning, a young boy gets lost. Searching for his way home, he finds a strange girl with horns trapped within a magic circle underground. The girl, a powerful fiend who has been confined there for centuries, asks the boy to stay with her a little as he's the only person she has spoken to in a long time. Reluctantly, the boy stays. And thus they begin telling each other stories...

The linear story is told from both the fiend's and the boy's perspectives. It begins with the fiend's narration as she tries to convince the scared boy to talk to her, but shifts to the boy halfway through.