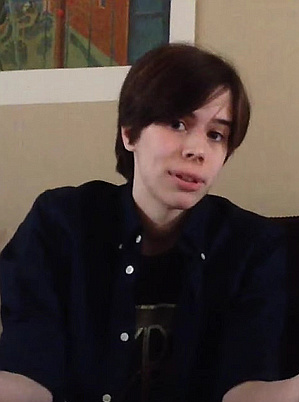 Jacob in January 2016.
"On the technical side..."
Advertisement:

Jacob Hope Chapman, a.k.a. JesuOtaku, is by far one of the most successful and analytical of the former DesuDesBrigade, formerly a member of Channel Awesome.

He rose to fame with a review segment simply entitled "The JesuOtaku Anime Review". His review approach was very analytical, using a four-star* From a minimum of one star to a maximum of four, with half-star increments, yielding 7 total possible ratings. rating system. He also produced his "summer project", an audio drama adaptation of Fruits Basket, every Wednesday throughout summer 2011 (and which can be found here

if you're interested). He is notable for his large number of shows:

After joining Channel Awesome, he gained a great degree of success previously unseen. Despite efforts to keep the DesuDesBrigade alive, he made the decision to officially leave the Brigade, which would later disband.

on Twitter. He also has a live stream, here

and he can be found here

on Formspring. Additionally, he has also often appeared on Nash's long running Radio Dead Air internet radio show, which can be found here

. He set up his own website in December 2012, which has everything he has a major role in, such as crossovers and panels at conventions, here.

In January 2013, Jacob announced that he'd be part of an adaptation of Katawa Shoujo, named Katawa Seiyu, being released on YouTube. The trailer is here.

JO himself has recorded auditions for several characters, which can be listened to here

. He was cast as the voice of Rin Tezuka

. However, the project has not been updated in over three years and is assumed to have been abandoned.

In October 2014, he has decided to call it quits due to decreasing ad revenue on Blip.tv and his new job at Anime News Network, leaving any still-running series abandoned. He was originally fine with people uploading his old videos

due to their removal from Blip, but has since requested that people take any old videos featuring him down due to potential harassment.

On January 30, 2016, he came out as Transgender. Most of his video content predates this, so invoked gender tropes in those were when he still publicly identified as a woman.

He is currently the head of PangoDango Games, who are developing their first visual novel, Lovely Little Thieves; it was originally due for release in 2016 but has been delayed indefinitely.

As of 2019, he co-hosted of the ANNCast podcast on Anime News Network with his (ex-)husband Zac Bertschy. He also wrote reviews and editorials for the site. Now he is working as a freelance writer for Crunchyroll.