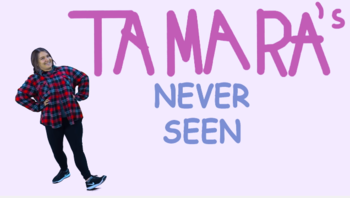 Just do it!
"My name is Tamara Chambers and this is Tamara's Never Seen!"
Advertisement:

In 2016, Tamara Chambers, known for her acting on The Nostalgia Critic, decided to create her own video series, inspired by her coworkers' and friends' shock at how few popular films she had seen. Tamara's Never Seen is about Tamara watching movies that she'd never seen- typically either very famous films, such as Jaws, or very nostalgic films for her generation, such as Watership Down- then describing her opinions and feelings she had watching the film. Her cats Ike and Wendy appear as well. Eventually, she started taking predictions on her Twitter, where she encourages people to guess her opinions on the movie, and she confirms or denies a select few at the end of her review.

She later created a second series for Channel Awesome, Tamara Just Saw, where she reviews movies that are currently in theaters, often accompanied by her friend Codexnote then credited as Cody Melcher. She also made a joke series called Tamara's Seen where she claims to be talking about one film she's seen but instead describes the plot of another.

As of 2020, Tamara's Never Seen has moved from Youtube to the Channel Awesome Twitch channel, where Tamara livestreams films she's never seen before.

Tropes for these series include: