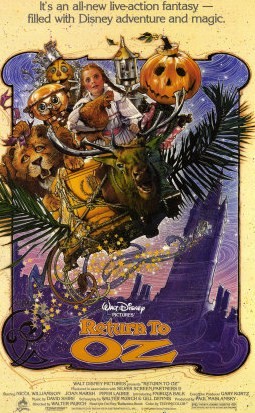 Nomes, Shock Therapy, and Wheelers, oh my!
Mysterious Girl: Why did they bring you here, Dorothy?
Dorothy: Because I can't sleep, and I talk about a place that I've been to, but nobody believes that it exists.
Advertisement:

Return to Oz is a Walt Disney film made in 1985, which was supposed to be both a semi-sequel to the MGM The Wizard of Oz and a more accurate adaptation of the more obscure original printed-page L. Frank Baum books (primarily The Marvelous Land of Oz and Ozma of Oz, the first two sequels).

The story starts six months after the tornado, with Dorothy unable to sleep because of her adventures in Oz. Her Aunt Em takes her to Dr. Worley, the head of a psychiatric clinic who specializes in electro-shock therapy. Before she can receive the "treatment", Dorothy escapes with one of the patients, who is lost when she and Dorothy fall into the river. When Dorothy wakes up, she is in the land of Oz, somehow joined by her chicken Billina.

However, Oz has changed: The Emerald City is in ruins, now ruled by the head-switching witch Princess Mombi. Dorothy's friend Scarecrow, the rightful ruler of the City, has been kidnapped, the citizens have been turned into stone, and the streets are patrolled by Wheelers. Now Dorothy, along with Billina and their new friends Tik-Tok, Jack Pumpkinhead, and the Gump, must go to the Nome King's Mountain to confront the Nome King and his minions, rescue the Scarecrow, and restore Oz.

Though the film was decried by critics for being too scary for children and did poorly at the box office, Return to Oz has gained a cult following. It also tends to be popular with fans of the original Oz books by L. Frank Baum; much of the plot is loosely adapted from his first two sequels to The Wizard of Oz, and the visual look and tone of the film is modeled closely on the original in-book illustrations. It is important to note that the original Oz series really could get this strange, and the famous MGM film is much Lighter and Softer.

Not to be confused with the 1964 Rankin/Bass Productions animated TV movie of the same name, nor with Filmation's rather dreary 1974 Animated Film, Journey Back to Oz, nor with Legends of Oz: Dorothy's Return.