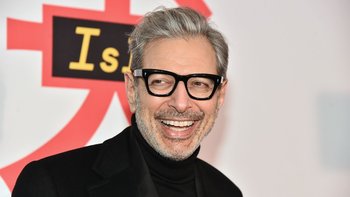 "I now, more and more, appreciate when I'm in a group of good people and get to work in good movies and projects. I'm wildly grateful and appreciative."
Advertisement:

Jeffrey Lynn Goldblum (born October 22, 1952 in West Homestead, Pennsylvania) is, uhh, an American actor, uh, known for his portrayal of, uhh, quirky/nerdy characters, as well as his, um, unique form of, uh, di-dialo—delivery! Which, uh, has become one of the most memorable aspects

of his, uh, career, averting the, um, t-trope that Realistic Diction Is Unrealistic. He, uh, also is a f-frequent subject of internet memes, g-going all the way back to the, um, late 1990s when a, uh, sc-sc-sc-screenshot from, uh, The Fly (co-co-coincidentally the co-codifier of Gibbering Genius) was given the, uh, caption Jeff Goldblum is watching you poop! Uh, fame.

And he is, um, actually alive, despite what, uh, G-Google tells you

. He was eulogized on Colbert, and Goldblum paid respects to himself.

Now pushing 70, Goldblum is still an unlikely sex symbol in the U.S., which is reflected in his private life: His second wife was none other than his Fly co-star Geena Davis, and he had a long relationship with Laura Dern, whom he met on the set of Jurassic Park. A more-accurate description would be bon vivant; he's not that nerdy in-person, and if you beat the PlayStation game based on The Lost World: Jurassic Park with 100% of all collectibles, a Shatner-esque cutscene of Jeff on a beach

will appear telling you to get a life. What a terrible reward to a game. "Get lost!" He sounds like a really sarcastic and disappointed drunk—well, moreso than usual

. After appearing in Thor: Ragnarok (his character belongs to a group of cosmic beings who are known for their personal obsessions), a meme came about from his incoherent answer

to a red carpet question about behind-the-scenes tensions in the MCU that he clearly has no idea about.

Jeff Goldblum has appeared in such productions as (arranged alphabetically):

is working its way through his entire feature filmography)

"And, uh, like that, we didn't expect a troper to suddenly-suddenly reach the end of this page. Here I am now by myself, um, talking to myself. That's-that's Chaos Theory."