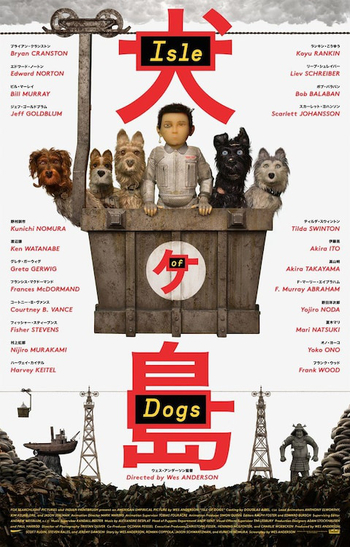 "To the north, a long rickety causeway over a noxious sludge marsh leading to a radioactive landfill polluted by toxic chemical garbage. That's our destination."
—Rex
Advertisement:

Twenty years into the future, Japan has been overrun with dogs, and a disease known as "dog flu" is ripping through the city of Megasaki. The city's mayor, Kobayashi, has decreed that all dogs are to be sent to Trash Island to contain the disease, creating the eponymous Isle of Dogs. A young boy named Atari Kobayashi flies to the island in an attempt to rescue his dog Spots, enlisting the help of a pack of dogs led by Chief (Bryan Cranston).

The film features an all-star cast, including both Anderson mainstays like Bill Murray and Edward Norton and also newcomers like Ken Watanabe and Yoko Ono. The film had its limited release on March 23, 2018, with a wide release on April 13th, 2018.