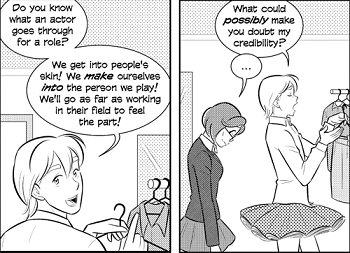 Method Acting is a controversial practice in the field of performance. The core gist of it is this: an actor tries to replicate the life circumstances, mannerisms and emotional feelings of the character he portrays, so as to give realism, legitimacy and dramatic strength to his performance. An actor playing a character from history might research the character, look for media featuring him, and try to live in the same conditions that that character lived, provided that doing so would not be detrimental to his mental or physical health. A character in a deep depression might make him reflect on his own moments of sadness and bring those feelings forth. He might gain or lose weight to fit a character who is morphologically different from him, but this is generally frowned upon (despite what Robert De Niro would have you believe).

Though Method Acting has produced powerful and affecting performances, it is increasingly finding itself coming under fire for its inherent limitations. Method actors are pretty notorious as being hard to work with because of their involvement with their roles. When all's said and done, method acting is a search for perfection in performance, so method actors sometimes have confrontations with cast and crew over the direction his character takes. Also, well, it's hard to give directions to an actor when he's in-character even off-camera (note that not all Method Actors do this, although they do have a reputation for it). Nonetheless, many of the greatest performances in movie history have resulted from an actor who completely immersed himself in the role. Method acting is, above all, not easy. It takes its toll on the actors, both physically and emotionally, and as mentioned earlier, can result in friction between the actor and the rest of the production staff. But when a performance was well method acted, it shows.

When a writer/director casts an actor for his natural fit into a role (natural method acting, if you may), see Write Who You Know. If the character falls too deep into their role, they may become Lost in Character.

Technically speaking, Method Acting refers to an outgrowth of Konstantin Stanislavski's technique as developed and popularized by Lee Strasberg. Stanislavski's own method, further developed after Strasberg's contact with the Russian's theories, is known as the System. In fact, in acting circles, there are several schools of the Method. Strasberg's version is the best known, with the Actor's Studio

being the most revered training ground. But there are also the theories of Stella Adler (who counted both Marlon Brando and Robert De Niro among her students), who was the only one to apprentice under Stanislavski himself. She felt Strasberg's focus on personal identification with the character got Stanislavski all wrong, and that the performer should be using his or her imagination to develop their performance. Sanford Meisner, who knew both Strasberg and Adler personally, developed his own spin on Method ideas, centered on the belief that performers should learn to act based on instinct (Meisner's long list of protégés include Gregory Peck, Steve McQueen, Grace Kelly, and Jeff Goldblum).

There is, needless to say, much debate between followers as to which is the "true" Method, with the likes of Elia Kazan believing it to be a highly personal, subjective actor-to-actor thing rather than a dogma. It should be noted that while for Stanislavski it was important that every actor (for example, even those playing 'Guard #3') research heavily and work just as hard as the actors playing the lead characters, Method Acting in modern cinema is usually only practised by the leading actors for main characters. In addition, one of the most well-known aspects, emotional/affective memory, is a cornerstone in the more modern development of the Method, whereas Stanislavski later noted its limitations in eliciting performance after one protégé had a mental breakdown.

A disclaimer is probably needed for anyone looking to try method acting: the process is controversial for a reason. Not only is it physically and emotionally exhausting, but it can also cause lasting physical and/or mental harm to an actor. This is because acting can alter the activity of a person's brain to fit the character they're portraying; staying in one role for too long will cause that character to gradually override the actor's state of mind, and suddenly dropping the character after a performance is complete can really throw the actor for a loop. In many cases, method acting gone wrong can result in the actor facing severe mental health issues and a lack of personal identity, hence the aforementioned case of Stanislavski's student breaking down. Actors who specialize in method acting often have to take long breaks between roles in order to recover from the immense strain they cause, and some, like Daniel Day-Lewis, retire much earlier than non-method actors partly because of the dangers posed by the craft.

On top of this, method actors often feel the need to undergo extreme physical changes to fit the part, such as Christian Bale gaining and losing a hundred pounds for Batman or The Machinist, or Brad Pitt deliberately re-chipping a tooth for Fight Club. Even when you're not making it a point to break bones or teeth for a film, those sorts of changes can leave permanent scars on your body and its responses to future situations. This is not a good thing.

British actors generally mock the trope. They find the Method to be unnecessary, and believe the actor doesn't become the character — the character becomes the actor.