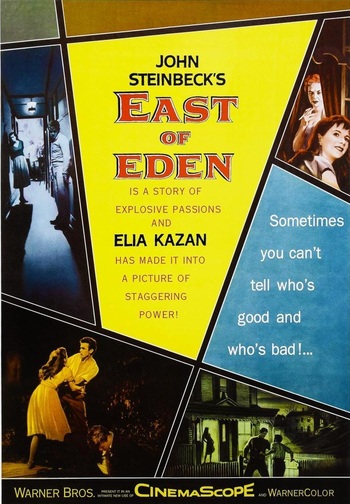 East of Eden is a 1955 drama film directed by Elia Kazan, very loosely adapted from John Steinbeck's novel of the same name.

The film stars James Dean as Cal Trask, in what was his Star-Making Role. Due to his sudden death the same year it was released, it's probably Dean's second most famous film after Rebel Without a Cause, and was also the only one of his three films to be released in his lifetime. Also in the cast are Julie Harris as Abra, Raymond Massey as Adam, Richard Davalos as Aron, Jo Van Fleet as Kate, Burl Ives as Sam and Lois Smith as Anne.

The screenplay, written by Paul Osborn, opts to completely skate over the first two-thirds of the novel and focus entirely on the later portions with Cal and Aron as teenagers. These segments are pretty faithful to the text, save for the elimination of one or two characters and a few motivations changed without the context of the earlier parts.

Steinbeck himself approved of the change to focus only on the Aron and Cal portions of his novel. He also approved of James Dean's casting. Reportedly, when he was brought to the set to meet Dean, Steinbeck exclaimed, "He is Cal!"