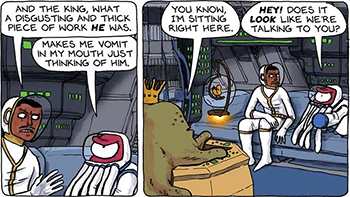 "What am I, some sort of object? Am I invisible or something that you talk about me behind my back in front of my face? Sheesh, no respect."
— Fenris (when asking Erasmus about him), Quest for Glory
Advertisement:

Alice and Bob are having a private discussion about their friend Carol. Or, at least, it would be private if Carol weren't standing right there, in plain view, and making no attempt to hide her presence. Even if she protests ("what am I, chopped liver?"), they don't care — they just ignore her and continue on. They don't even wait until she leaves the room!

Can play out near-identically to Right Behind Me, with the key difference being that Alice and Bob are fully aware of Carol's presence the entire time (or, if they're not, then they really should be). They're merely speaking of her as if she wasn't present. Might also result in a Right in Front of Me moment, depending on the status of the person being ignored. Either way, it's clear that the people making the remarks just don't care that the target of their conversation is right there with them.

If this happens to The Hero, they may be wondering Dude, Where's My Respect? Compare You Know I'm Black, Right? Contrast Right in Front of Me, in which Alice and/or Bob don't know that the other person in the room is Carol.

If Alice and Bob know that Carol is here but don't figure out she is concerned by their commentary, this is an Oblivious Mockery.