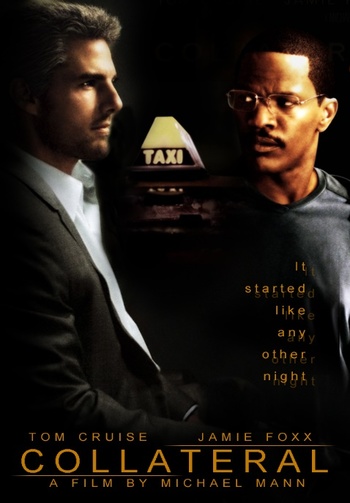 "Since when is any of this negotiable?"
Okay, look, here's the deal. Man, you were gonna drive me around tonight, never be the wiser, but El Gordo got in front of a window, did his high dive, we're into Plan B. Still breathing? Now we gotta make the best of it, improvise, adapt to the environment, Darwin, shit happens, I Ching, whatever man, we gotta roll with it.
— Vincent
Advertisement:

Max Durocher (Jamie Foxx) is a cabbie living in L.A. with big dreams of opening his own limo company and catering to rich, important clients at some point. But without the motivation to take the risk and leave his job, he's just drifting through life. He can't even find the courage to call the attractive attorney, a fare, who flirted with him and gave him her card. He's stagnant. Until he picks up one fare that will change his life.

Enter Vincent (Tom Cruise), who commandeers Max's taxi. He is the chaotic counterpart to Max's carefully structured world. A jazz aficionado, he preaches Darwinism and improvisation. He's jaded by the city, hates the overpopulation and the filth. Oh yeah, and he also happens to be a hitman for a private military company. And for one night, the cabbie and the assassin find themselves inescapably bound together.