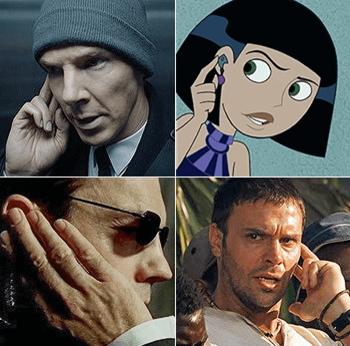 How do you emphasize that a character equipped with an earpiece for communication, like reporters, bodyguards or Secret Service agents, is currently listening in or talking to the person on the other end and not to themselves or somebody else in their presence? Simply have them reach up with their hand to their ear while talking.

This visual cue can also be played for suspense in cases where we don't hear what's been said over the line but we know by the touch of the ear that an important order has been issued and the hero is now in danger.

Truth in Television for two reasons: the earpiece makes a very convenient place to put the activation button (look at a Bluetooth earpiece or watch the drive-thru employee at a fast food joint) and pushing lightly on an earpiece both pushes the speaker closer to your ear and makes for a tighter seal, which could mean the difference between hearing or missing a vital message.

Alternately, can be considered The Coconut Effect as a viewer might now understand with whom a character is speaking without an earpiece touch as a reminder.

See Radio Voice for when voices are slightly distorted so that the audience can tell that the voice is being received through a communications link. See also Pstandard Psychic Pstance (obligatory forehead touch) and Removing the Earpiece.