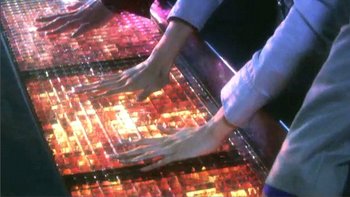 Normally I'd say "read the manual", but I'm not sure that would help in this case...
Advertisement:

For some reason, alien entities and super-computers both dislike making anything remotely clear when used by pitiful humans.

Maybe there are endless lines of symbols, shifting colored lights, or lines of normal text spiraling past far too quickly for the eye to see. Whatever the case may be, the characters quickly get the computer or other device to do its job, but God help the audience if they want to know what's going on.

Whatever the case is, the writers need a device to do a job at the character's behest, but don't want to bother showing what's going on in the device. This may be to save the plot, to save money, simple lack of imagination, or the knowledge that Technology Marches On: visible screens from old series look less advanced than your cellphone.

Such interfaces are usually brightly colored and quickly moving, like a visual form of Techno Babble.

Thankfully, our heroes have either already figured out the weird interface, or have a way to bypass it... unless we end up with a Lost Technology Weapon of Mass Destruction, in which case it'll probably take between 30 and 40 minutes to really get a feel for a whole new language and/or thought structure.

This is the opposite of Viewer-Friendly Interface (VFI), in that while a VFI focuses on showing the viewers exactly what is happening in the clearest possible methods, this trope prevents such a thing to the greatest degree possible. Strangely enough, they tend to be found in similar positions on similar shows. In some cases, a VFI and this trope are merely a function of how fast the user types, or an Obfuscated Interface might work as a backup control mechanism for normal devices with more user-friendly controls. If it involves alien technology, chances are you'll have no idea what it's doing until it's done.