Smith of the Yard 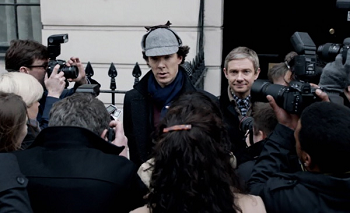 "I'm Chief Superintendent Lookout...Lookout of the Yard."
"Why, what will we see?"
"I'm sorry?"
"Well, what will we see if we look out of the yard?"
"I'm afraid I don't follow that at all."
— Monty Python's Flying Circus
Advertisement:

Most detectives in fiction barely get recognition. Gil Grissom, Jack Malone and Sam Spade could happily walk into a bookshop in their respective cities, seduce the owner and leave without being recognized.

Not so for Smiths of the Yard. They are very well-known. The newspapers follow their activities. When there is a major crime and they are involved, the papers will say, "Smith of the Yard is on the case". If they're not and the crimes are particularly diabolical, the papers will call for their involvement. And needless to say, he (Almost) Always Gets His Man.

In Real Life, the Yard is Scotland Yard, headquarters for the Metropolitan Police of Greater London. The Yard has become synonymous with police to the extent that any police version of the "Nations of the World" Montage will feature a shot of the New Scotland Yard sign.

Truth in Television in the United Kingdom in the 1920s and 1930s, but not today. The trope has largely died (outside period pieces) with it.

Subtrope of Famed in Story.