This is about the magazine. For the blokes in trenchcoats and fedoras, see Private Detective or Hardboiled Detective. 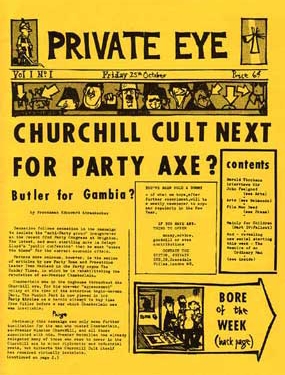 The very first edition, layout and cartooning by Willie Rushton.
"The best comedy is when you attack the strong, not the weak."
—Ian Hislop, editor.
Advertisement:

of current affairs and satirical humour, running since 1961. Founders included its first editor Richard Ingrams, and comedians Peter Cook and Willie Rushton, who had all been contemporaries at Shrewsbury School and later at Oxbridge.

It does a lot of investigative journalism and has been sued for libel a considerable number of times (it usually loses, and would have been bankrupted by the damages if not for donations from supporters and subscribers). Its editor, Ian Hislop (a team captain on Have I Got News for You), even held the record for 'Most Sued Man in England' for a time. For many years it was verging on a point of pride how long it had been since they won a case. The first time Ian Hislop won a libel suit, the following issue was filled in celebratory manner with yet more libelous material, just because they knew they'd get away with it. note For those reading from outside the UK, it's important to point out that under English law it is possible for something to be both perfectly true and libelous, as it is up to the defendant to prove the truth of what he/she has said, and even then truth is not considered an absolute defense against libel. In the United States, the person bringing the suit has to prove that what was said is false, at least when the defendant is a newspaper or other media outlet (the standard for when the defendant is an individual varies from state to state, but the law of defamation as applied to the media is largely controlled by the Free Press Clause of the First Amendment to the federal Constitution and is thus consistent across states). Also, American law does consider the truth to be an absolute defense; moreover, in the United States, statements of opinion are also protected, and the definition of "opinion" is quite broad—even factually false statements can be "opinion" in the right context. The flip side of this is that getting an injunction to prevent something being published in the first place is rather harder in Britain - otherwise known as Publish and be damned. Or at least, it was, before the current fad for "super injunctions", where the target is not even allowed to say they have had an injunction put upon them, let alone talk about the original subject...

Fond of the Unusual Euphemism and obscure nickname, sometimes for legal reasons, to the point that it can become unreadable to those not in the know. Most of these are derived from very obscure old political scandals.

Pretty much every British newspaper has a well-known nickname that was given to them by the Eye. A lot of politicians and celebrities have also been given nicknames, usually derisive.

There are also features on the hypocrisy of the Fleet Street press ("Street of Shame") and a great section called "Rotten Boroughs" on local council misbehaviour, along with annual awards — such as for Tory bigots.

The magazine was notable in the early 21st-century for rejecting the choice of many newspapers to make the full content of the print edition freely available on the website, with the Street of Shame column frequently (and, as it turned out, correctly) mocking the belief that relying on online advertising revenue would be a sustainable business model. The website has been used only to provide samples of the humorous content, and sometimes to make available detailed data files resulting from investigative journalism. Although there is still no digital edition, there is a podcast, Page 94

, which reveals behind-the-scenes stuff about how the journalists research their stories and where the jokewriters get their ideas.

However, the truly unparalleled touch of genius about Private Eye is widely thought to be its famous (cont. p.94).