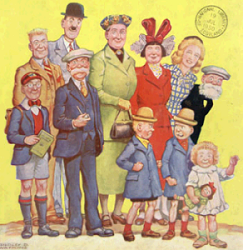 The Broons is a Scots comic strip that has been published in the weekly newspaper The Sunday Post since 8 March, 1936. Created by writer and editor R. D. Low and artist Dudley D. Watkins for Dundee publishers DC Thomson, the strip stars the eponymous Broon ("Brown") family who live in a tenement flat at 10 Glebe Street in the fictional town of Auchenshoogle.

The focus is on the family's generational gaps, poverty and thriftiness, miscommunication, and the everyday stresses of a family of nine sharing a tiny flat.

The strip's Scottish setting and heavy use of the Glaswegian dialect are its main selling points, so the dialogue's near-incomprehensibility to outsiders isn't really a problem. A close third is the 'nostalgia factor' of Scots retirees and working-age people. The Broons and its sister strip, "Oor Wullie", continue to sell well enough to merit annual releases in Scotland. Both strips and their sales are somewhat indicative of a recent cultural movement in Scotland which favours Scottish authors, fiction, and even history - including, if not especially, in Scottish schools.

The family itself consists of: