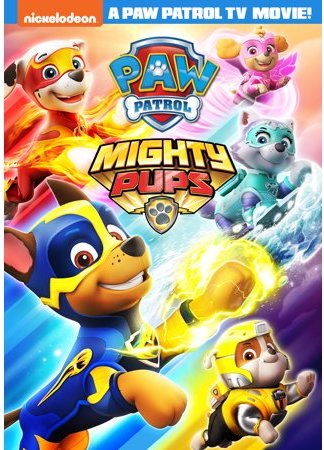 PAW Patrol: Mighty Pups is a 44-minute special of Nickelodeon's PAW Patrol, airing late 2018. Unlike most other movies, however, the DVD version was released long before it appeared in cinemas, available at Walmart since September 11th.

Mayor Humdinger wishes to go to the moon and be the first mayor there, enlisting the help of his nephew Harold to build a rocket and launch himself into space. Unfortunately a mishap causes the rocket to launch preemptively, and the rocket accidentally knocks a meteor off course and send it spiraling towards Adventure Bay.

The PAW Patrol clears everyone off the streets before investigating the meteor. A massive flash blasts the pups (and Harold) backwards, which gives the pups (and Harold) superpowers. Mayor Humdinger desires to also get some of those powers for himself, so he, along with Harold, works to try and steal the meteor. They are foiled by the now Mighty Pups, however, and Humdinger opts to give up and run away.

Harold on the other hand is more determined, and realizes that the team relies on Ryder's leadership - without him, the team would fall apart. Thus, Harold captures Ryder and then builds a giant robot, using the meteor's powers to supercharge it and further captures the PAW Patrol. Without Ryder, the team, as Harold predicted, falters a bit, but luckily Chase manages to take over as leader and defeat Harold's robot. Unluckily, the robot gets knocked into The Lookout, turning it into a giant rocket blasting off into space.

The pups do their best to try and stop the robot rocket. At this point though, Ryder manages to escape and sends a message to Chase, informing him where the meteor is. With the message, the PAW Patrol grabs the meteor, depowering the robot and sending it back down to Earth. Skye and later Chase create a whirlwind to slow down The Lookout's descent, and Ryder emerges unscathed.

Rubble places The Lookout back where it should be just when the meteor stops glowing and the pups find they've lost their abilities. Ryder and the PAW Patrol place the meteor into storage, leaving just as the meteor re-emits a soft glow.

In the PAW Patrol TV series, this movie was adapted into a subseries titled "Mighty Pups: Super Paws".