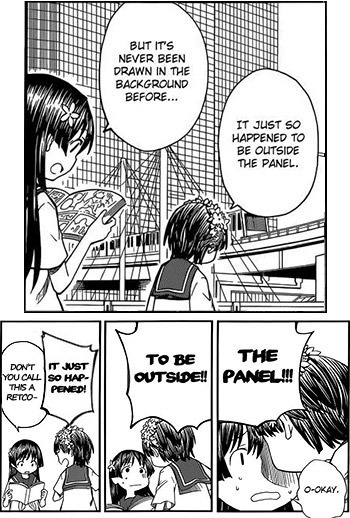 They're talking about a Space Elevator. And smashing the fourth wall to smithereens while they're at it.
"Comic book fans will be familiar with the term 'retcon', which in layman's terms means that the writer waves his hand and tells you 'Remember when we said this? We screwed up, forget about that.'"
— Spoony on Highlander III: The Sorcerer
Advertisement:

A retcon may be used as part of an Armed with Canon campaign launched by one author against the work of another author in the same Shared Universe. Over-use of retcons can result in Continuity Snarl. It can also result in your readers and fans approaching the work with a certain degree of skepticism, cynicism or even complete uninterest, especially if you tend to obviously and quickly retcon away that which turns out to be unpopular or drastically challenges or changes the status quo — after all, why get involved in your latest Crisis Crossover Event which promises to change everything forever and that nothing will be the same again if there's a good chance it'll all just be retconned away after a short period of time?

This happens very easily with prequels when the writers aren't being very careful. On the other hand, Tropes Are Not Bad. It's entirely possible that an author will retcon their own work to fix a Continuity Snarl or even apply an Author's Saving Throw if things get really hairy. Sometimes, if the pre-retconned works are no longer considered canon by the author, those works are discontinued in canon. In Long-Runners, retcons are often used to fix Values Dissonance, to address problems stemming from the various manifestations of Time Marches On, or to bring previous parts of the story in line with shifts resulting from things like Doing In the Wizard.

Compare Flip-Flop of God. Tends to come in The Reveal format. May involve Opening a Can of Clones. Can at times also qualify as a Throw It In.