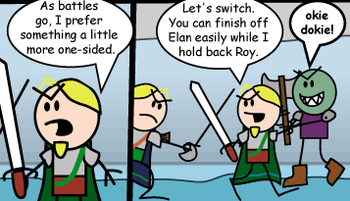 "Hey! No fair! Where does it say they can switch?"
— Jack Spicer, Xiaolin Showdown
Advertisement:

Our group of heroes are fighting against the Psycho Rangers, Evil Twins, or opponents skilled or specialized against certain techniques against them, individually, fighting to, at best, a stalemate. One of the heroes realizes it's futile fighting against their equals, so all of them switch opponents, which wins them the battle. For some reason this almost never leads to Evil Twin A being defeated by Twin B but Evil Twin B defeating Twin A, as might be expected if they're actual equal to their doubles, nor the evil ones winning due to the change. There just seems to be some rule that switching opponents automatically guarantees heroic victory, even if it doesn't make sense. A common subversion of the Plot Tailored to the Party. May be justified in that the villans use techniques that are only useful against their chosen enemy, meaning they would be useless against anyone else. Another justification that makes more sense is that the heroes don't know their own weaknesses as well as they know those of their teammates, so when they switch, their teammates know the weaknesses of their teammate and thus the Evil Twin they're up against and can thus defeat them.

Compare Counterpart Combat Coordination and Midfight Weapon Exchange. A "Strangers on a Train"-Plot Murder is similar, but planned beforehand, and usually executed by villains.