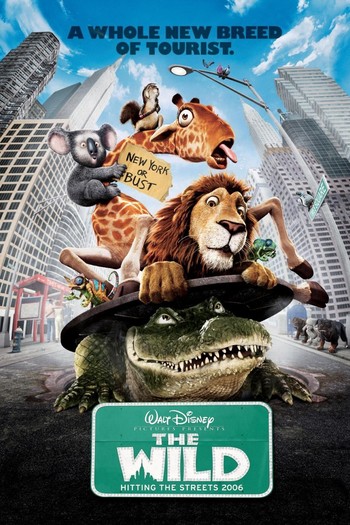 The Circle of Life meets the Big Apple.
A movie distributed by Disney (but made by the now-defunct Canadian C.O.R.E. Feature Animation studio) starring Samson the lion (voiced by Kiefer Sutherland) and his son, Ryan (voiced by Greg Cipes), a squirrel named Benny (voiced by Jim Belushi), an anaconda named Larry (voiced by Richard Kind), a giraffe named Bridget (voiced by Janeane Garofalo), and a koala named Nigel (voiced by Eddie Izzard).
Advertisement:

When a disastrous attempt to prove himself leads to a falling out with his dad, Ryan is accidentally shipped away to the African wild. A remorseful Samson searches for him with help from his friends, but during their search, they notice Samson's odd behavior, unusual for a lion of his caliber. Things get worse when the gang encounter wildebeest led by the wicked and insane Kazar (voiced by William Shatner) who wants wildebeests to become top of the food chain.

The Wild provides examples of: