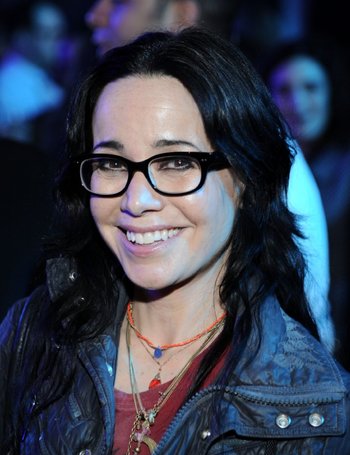 "Is being an idiot like being high all the time?"
Advertisement:

Janeane Garafalo (born September 28, 1964 in Newton, New Jersey) is an American comedienne, actress, and the quintessential Gen X chick. Often cited as the real-life Daria.note Contrary to common assumption, she did not provide the character's voice. The voice of Daria on her actual show is the same one from when she was a supporting character on Beavis and Butthead: Tracy Grandstaff.

A stand up comic by trade, she was first discovered during a comedy talent search by Showtime. Her TV debut was on The Ben Stiller Show (the second one), which resulted in Garofalo and Ben Stiller getting cozy for a while. A lucky break landed her the role of Paula on The Larry Sanders Show, netting her two Emmy nominations.

Garofalo joined Saturday Night Live during the show's 1994-95 season, which was fraught with Seasonal Rot the likes of which haven't been seen on the show since the 1980-1981 season note and to a lesser extent, the 1985-1986 season. Garofalo hated her time on the show, describing the sketches as "juvenile" and "homophobic" and referring to the male-dominated cast and writing staff as an "immature boys' club." Garofalo quit midseason (her last episode was a February 1995 episode hosted by George Clooney) and was replaced by Molly Shannon. Garofalo's short time on SNL yielded no recurring characters and only thirteen celebrity impressions: Pamela Anderson (as C.J. Parker from Baywatch), Kathleen Gingrichnote Newt Gingrich's mother, Hilary Clinton (with Bill Clinton played by Michael McKean), Jackie Stallone, Joan Embery, Jodie Foster, Madonna, Juliette Lewis, Martha Stewart, Mary Lou Retton, Susan Sarandon, Susan Molinari, and Sherry Stringfield (as Susan Lewis from E.R.).

Her other notable 90s roles include Jerry's Distaff Counterpart on Seinfeld, a snarky Gap manager in Reality Bites, and starring alongside Uma Thurman in The Truth About Cats & Dogs. She continues to act on television.

In the 2000s, her acting largely took a backseat to work as a liberal political pundit, most prominently as host of her own show on the short-lived Air America Radio. Today, though her acting career is virtually nonexistent, Garofalo circulates around the New York comedy club scene, performing stand-up for live audiences.