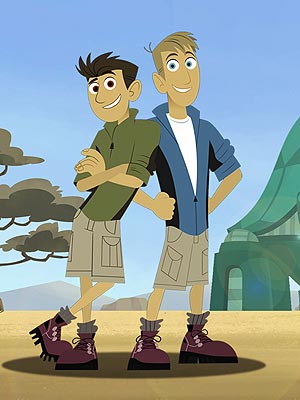 We're gonna save some animals today with Creature Powah!
"TO THE CREATURE RESCUE!"
Advertisement:

Wild Kratts is an long-running educational TV show produced for PBS Kids and TVO Kids which is premiered in January 2011 and is currently ongoing. It's an animated and live action-mixed cartoon starring Martin and Chris Kratt of Kratts' Creatures, Zoboomafoo, and the short-lived Be the Creature fame. They travel around the world in a turtle-shaped, go-wherever transport they call Tortuga HQ along with three techies: Aviva, the head techie who built the creature power suits and other gadgets, Koki, who does a lot of data monitoring and communications work, and Jimmy Z, whose jobs seem to be teleport master, pilot, and eater of pizza. With the Creature Power Suits (devices that scan an animal's DNA and allow the user to transform into that animal), Martin and Chris can become any animal in the world, in a rather mecha-like way. Like its predecessors, the show's focus is on animal education and conservation, but because of the animated environment it's not limited by what the brothers happen to catch on tape. This means that they can show rare, ridiculously cool things like a bull sperm whale and a colossal squid battling it out.

Not to be confused with WildCATS.

open/close all folders
Tropes A to M
Tropes N to Z
Troping Free and in the Wild!
Feedback

This happens to the brothers in "To Touch a Hummingbird", losing their clothes in the middle of a rescue and ending up shamefully slinking away covering their modesty with giant leaves.

Example of:
Naked People Are Funny

This happens to the brothers in "To Touch a Hummingbird", losing their clothes in the middle of a rescue and ending up shamefully slinking away covering their modesty with giant leaves.