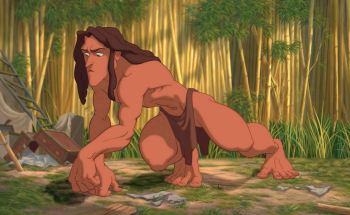 Remember how your mom always said to stand up straight? This is why...
Advertisement:

A stock pose used to show how feral a character is by having them stand and walk in a manner reminiscent of an ape or of a stereotypical caveman. They are hunched over, and walk slightly like a gorilla. This is used to show the character has regressed to a primal, wild state.

In downplayed examples, the character remains biped, but stands hunched over, with their arms hanging down and their head jutting forward from their shoulders. More extreme cases drop entirely to all fours, with the characters resting their weight on their knuckles as well as their feet. Note that, since human legs are considerably longer than human arms, a fully quadrupedal, knuckle-walking stance requires the character in question to have a truly apelike anatomy in addition to an apelike mindset if they're to walk like this without some truly awkward contortions.

This is not that easy to do. Too many times, the "primal" part is left out, and the actors just end up sneering, hissing, and hopping about like a kid trying to be a kangaroo.

If done right, this can strike fear into our hearts either by the character doing the stance looking intimidating or by falling into the Uncanny Valley. This may be due to suffering a nervous breakdown and showing an animalistic side. However, this often this falls short and strikes Narm into our hearts.

The Frazetta Man is almost always depicted in this stance. Compare Limp and Livid, Three-Point Landing, and Running on All Fours. Has nothing to do with Primal Scene.

Vordt of the Boreal Valley

He spends the entirety of his boss fight Running on All Fours.

Vordt of the Boreal Valley

He spends the entirety of his boss fight Running on All Fours.