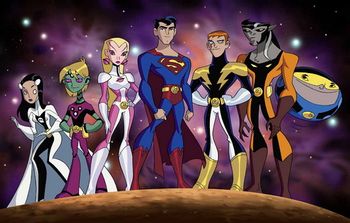 At Brainy's insistence, everyone studiously avoids telling Clark who he's supposed to become in the future. Regardless, Clark finds the Superman Museum, connects the dots, and takes the costume from the display case, and the name of Superman, for his own. Together they defeat the Five, and the adventures begin.

The show had a very Silver Age tone to it, but the most noticeable and controversial change from the source material was turning team genius Brainiac 5 from a Human Alien into an android. Word of God is that this was supposed to tie him more closely to his ancestor the original Brainiac, as well as avoiding having to explain how an organic can be the 'descendant' of a robot.

Season Two saw everyone age about two years, even Brainy, and the show went Darker and Edgier after the very light and bouncy first season. The premiere visited a Bad Future where Superman's clone was bred to fight Galactic Conqueror Imperiex, who when cornered escapes to the 31st century and proceeds to wreak havoc as the season's Big Bad.

Not to be confused with Legion of Super-Heroes (2023).