Film / Conquest of the Planet of the Apes 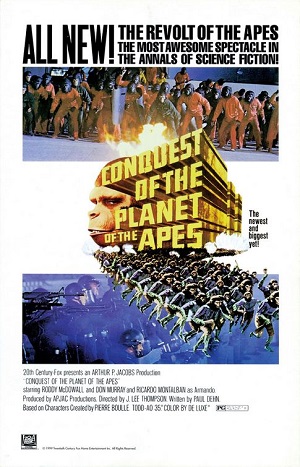 Twenty years have passed since Cornelius, Zira, and Dr. Milo arrived on Earth. During those years, cats and dogs died of a mysterious disease, and apes became both household pets and servants for mankind. The United States became oppressive and fascist in culture, of uniformed classes and castes, based upon ape slave labour. And Milo, now known as Caesar, is a horseback rider in Armando's circus.

A final sequel to this movie, Battle for the Planet of the Apes, was released in 1973.