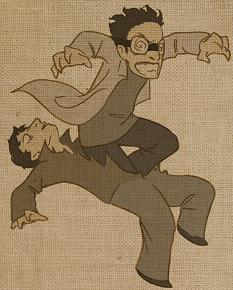 Look out! It's SCIENCE!
Art

on DeviantArt
"Guilty! Guilty! My evil self is at that door, and I have no power to stop it!"
— Dr. Morbius, Forbidden Planet
Advertisement:

When someone's inner darkness doesn't quite take over someone, but it does "escape" their body and rampage. Fighting someone else's Enemy Without is tricky, as often it will either kill the person projecting it if it dies, or it will just resurrect itself until the actual darkness in the hero's heart is dealt with by the hero themselves.

Often symbolically represents repression, and the hero's refusal to acknowledge the darkness within or some other aspect of themselves. Victory is achieved half the time via "reintegrating" with it. The other half of of the time it can be seen as representing some inner demon, and thus, it must be abandoned, purged, or confronted and conquered.

Sometimes this battle will occur inside someone's own head in a dreamscape, making it both the Enemy Within and the Enemy Without at the same time. It may require saying "I'm Not Afraid of You!" to weaken it enough to beat.

This trope is very similar to The Heartless, Made of Evil, and Literal Split Personality. It is distinguished from The Heartless by having some personal connection to the person/people it was created from, from Made of Evil because the Enemy may be flesh and bone, and from Literal Split Personality by leaving behind a clearly-defined original character.

Upon Ben losing control over himself, Ghostfreak suddenly escapes from the Omnitrix and reveals his true intentions.

Upon Ben losing control over himself, Ghostfreak suddenly escapes from the Omnitrix and reveals his true intentions.