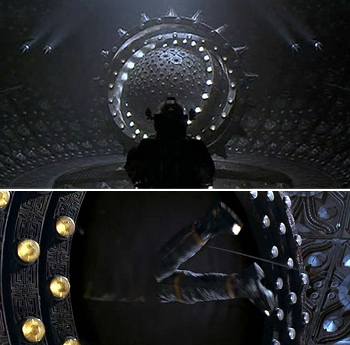 Even astronauts can forget to stand behind the yellow line.

The captain of the Cool Ship shows off the fantastic power source of the vessel to others, usually hapless passengers (and of course us, the audience,) to impress them with just how powerful indeed the ship is. Included will be dialogue of how dangerous it is to be exposed to such terrible energies, and that were it not for the radiation suits/visor/lead glass that were provided to gaze through, it would have otherwise been certain death to merely look on such elemental fury.

Related to Take Our Word for It, a Perilous Power Source can be used to compensate for lack of budget or Special Effects Failure.