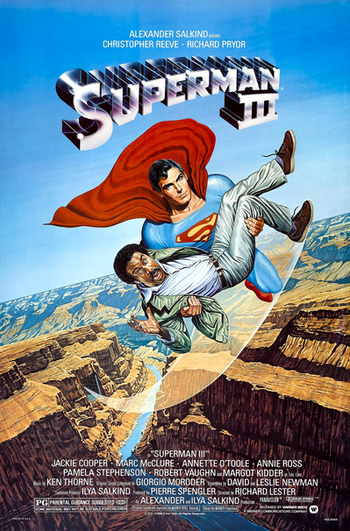 "I ask you to kill Superman, and you're telling me you couldn't even do that one simple thing." *mic drop*
— Ross Webster
Advertisement:

Superman III, released in 1983, is the third of the Superman films starring Christopher Reeve.

The Man of Steel's mythology is further explored as Clark returns to Smallville for his high school reunion and meets back up with his old friend, Lana Lang (whose actress, Annette O'Toole, went on to play Ma Kent in Smallville). The main plot of the film involves heavily-promoted co-star Richard Pryor as Gus Gorman, an idiot-savant whose hacker talents are co-opted by the sinister executive Ross Webster (Robert Vaughn) when caught skimming from the payroll. Thus blackmailed, initially Gus willingly helps the forces of evil — turning Superman evil with faux-Kryptonite and designing a supercomputer that could be used to conquer the planet. But he eventually relents and assists Superman, who's managed to conquer his dark side, in destroying it.

Superman III was directed by Richard Lester (best known for directing A Hard Day's Night and Help!), who completed Superman II after Richard Donner was canned following a litany of disagreements with the producers, and its emphasis on comedy was (and still is) derided in some circles — although this discontent has more to do with the acrimony going on behind the scenes. A very serious 'duel' between Superman and his Clark Kent personality (as the hero literally grapples with his darker nature) is widely considered one of the finest moments from the film series. Richard Pryor's performance is also a polarizing affair, as he was an avowed fan of Superman and tried his best to do the film justice (because if unnecessary comic relief is going to be shoehorned into a film at all, it might as well be left to an actual comedian).

Perhaps the biggest impact on canon was the reinvention of Lana Lang and Superman's relationship. In the comics Lana had been a prominent supporting character for over three decades by this point but she had essentially been a redhaired, teenage version of Lois (in the Superboy stories) or an adult version of same in the Superman stories (she's a glamorous cable news reporter). The movie repainted her as a Girl Next Door from Clark's past who was more interested in him than his superpowered alter-ego, essentially turning her into the Betty to Lois's Veronica. Most stories since have followed this interpretation of the character.

After seeing how the kryptonite ray is hurting Superman, Gus turns against Webster and goes to rescue Superman.

Example of:
Siding with the Suffering

After seeing how the kryptonite ray is hurting Superman, Gus turns against Webster and goes to rescue Superman.