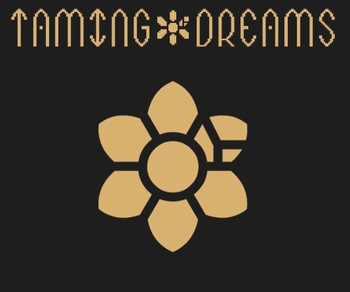 Taming Dreams is an Android game, made by Tobias Cornwall and released in 2015. It revolves around a lad named Mardek, his childhood friend Deugan, and a god living in Mardek's head called Rohoph. If this sounds somehow familiar, it is because the game is a Continuity Reboot of MARDEK, and Tobias used to go by the nickname Pseudolonewolf.
Advertisement:

The game takes place in a world called Alora Fane, a world consisting of seven pocket dimensions formed out the dreams of the gods. The gods, however, have abandoned the world, leaving it to slowly wither. That is, until a group of worldless gods called Atonae discover the world. One of them, Rohoph, enters the world in the form of a crystal falling from the sky, and takes up residence in the otherwise empty head of Mardek, who was the first bliss-sentimental person to touch the crystal. Rohoph is one of the Atonae, gods that lack a world, some for a good reason.

The game is a rather large departure from the original RPG format, doing away with such things as Character Levels and the "hit it with a sword until it falls over" concept of combat. The Miasmon encountered are embodiments of the characters' internal turmoil, and are defeated by accepting said internal turmoil by building rapport with the mon, whereas the mon's attacks sap the characters' willpower. The combat system also involves an intricate take on Elemental Rock–Paper–Scissors involving one immutable sentiment and three alterable runes.

As befits the combat system, the plot gets rather emotionally complex, although the lampshades and peculiar humor from MARDEK are still present in force.

Sort of a ludicrous abstraction though... What would the numbers actually represent? The tensile strength of our muscle fibres? The hardness of our skin? The number of active neurones in our brains?